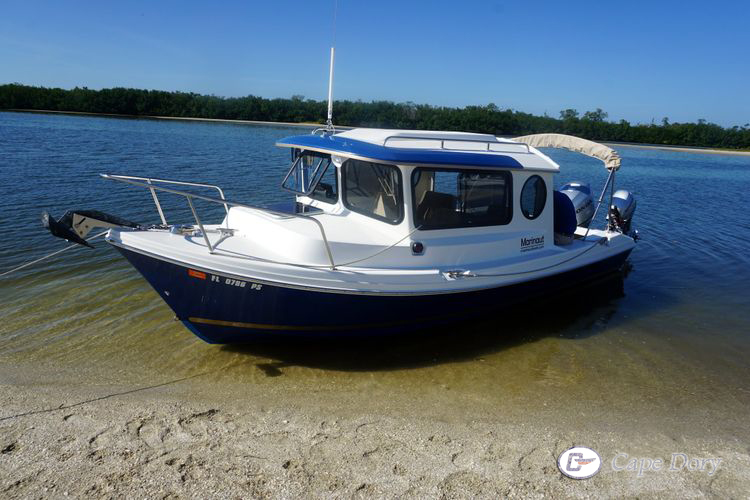 A NEW SERIES OF POWERBOATS will be produced in Sarasota, Florida,

The series’ size range from 22 to 36 feet and will start with the Cape Dory Marinaut 220 Pilot House Cruiser and the 25-foot model and will be marketed through a network of select North American dealers as well as internationally. A line of Cape Dory Catamaran Luxury Yachts will also be introduced in sizes ranging from 42 to 75 feet.

Madison Bay Holdings, Inc. (MBH) acquired the trademarks and assets of Cape Dory Cruisers after serving as a shareholder and executive vice president of C-Dory Boats. MBH plans to gradually phase each model into production as they develop and expand manufacturing facilities and infrastructure. Originally headquartered in Seattle, Washington, MBH is owned and operated by Ricardo Ruelos. As one of the original shareholders of O’Brien Water Sports, Ruelos founded MBH and has been involved as a shareholder, owner, representative, or senior executive of a variety of boat manufacturing companies including C-Dory Boats, Warlock Power Boats, Osprey, MasterCraft, Century Boats, and recently served as CEO of Westship World Yachts. Capedorycruiser.com.

ALBURY BROTHERS BOATS has opened a new office at the Charleston City Marina in Charleston, South Carolina. “Our boats have a nice following in the Low Country, North Carolina, and Georgia, “says Jeff Lichterman, president of Albury Brothers. “Having a central location in Charleston will allow prospective clients to inspect and sea trial our boats without having to travel to West Palm Beach and have local support.”

The floating houseboat office is located toward the end of the marina’s Mega Dock and is shared with Captain’s Choice Yachting, who represent and care for the Albury Brothers boats at the Charleston location and assist clients when Albury Brothers’ personnel are not on site. To celebrate the opening of the new location, a brand-new Albury Brothers 33 is moored alongside the office and available for inspection, charter and sea trial. A new 27 is planned to replace it in the future. Albury Brothers Boats are built in Man O’ War, Abaco, Bahamas and Riviera Beach, Florida. alburybrothers.com.